DBH Group was at Ecosummit Berlin 2015

DBH Group was invited to the Ecosummit Berlin 2015 on 19-20 May and it was a well structured and really inspiring event for startups, accelerators, VCs and corporates as well. Let me give you a glance at the show and the participants and introduce some interesting startups in my post.

The Ecosummit show was really interesting to me as they had a focus on smart green energy, mobility and buildings – the 3 pillars of the Energiewende aka renewable energy. The purpose of the show was to introduce smart, green and lean startups that make and sell intelligent, resource efficient products in a capital efficient way.

The ECO15 event was orchestrated by Jan Michael Hess, Founder and CEO of Ecosummit. The event took place in Berlin a great startup hub and in a superb conference location called Radialsystem what was opened as a new creative space for the arts in Berlin in 2006. Formerly a turn of the century pumping station for the Berlin Wasserwerke (Berlin Water Services), RADIALSYSTEM V – situated in the urban centre of Berlin between Friedrichshain, Mitte and Kreuzberg – currently functions as a cultural centre where new ideas ‘radiate’ out in all directions, attracting artists and the public from within as well as beyond the city limits of Berlin.

The ECO15 Berlin agenda featured 91 speakers including 65 early and late stage startups and 29 sponsors. The secret of time keeping was collective discipline fostered by a speaker clock that is also visible to the moderator and skipping questions from the audience. It was really fascinating how professional the showdeal was and the humble of the speakers even from the big corporates and governmental institutions.

There were interesting corporate presentations among others from Germany Trade & Invest, Swedish Energy Agency, EnBW (one of the largest energy supply companies in Germany and Europe), E.ON AG, Wellington Partners, Aster Capital, Cleantech Invest and many others. For me the key messages were finding opportunities in a decentralized world and Energiewende (German for Energy transition) which is the transition by Germany to an energy portfolio dominated by renewable energy, energy efficiency and sustainable development and the final goal is the abolition of coal and other non-renewable energy sources.

One of the most memorable hacks of the show was when Dr. Dirk Bessau (manager of the KIC InnoEnergy office in Berlin) got rid of his clothes during his speech and stood on the stage in shorts and T-shirt then played with a football and with a basketball representing the open minded approach and flexibility KIC InnoEnergy offers to startuppers! It was quite a moment and Dirk Bessau was splendid in astonishing the audience and have fun.

As DBH Group is a Dutch-Hungarian company I was delighted that there was also a Dutch related episode in the program when Yme Bosma, Program Director @Rockstart Smart Energy Accelerator introduced startups from their 180-days intensive startup accelerator program in Amsterdam such as Finch Buildings, Zenodys, Swuto, Bleeve, Capacity Energy Storage, Viridom, Masar, Wirewatt and Entelligo. I had an amazing discussion with these fellow entrepreneurs from all around the world and my conclusion was that if they succeed the world will truly be a better place!  Thanks Stefano, Jurrian and Joel! 🙂

In the late stage category (> €2M revenues 2014) of the ECO15 Berlin Award were:
Sonnenbatterie picking up Gold and €1.5K prize money,
Sunfire receiving Silver and €1K
and Thermondo scoring Bronze and €500

Thanks for Jan Michael Hess for the great show!

Thanks for Anna Yukiko Birkenbach, co-founder of Ecotastic, who has a saying that every entrepreneur should consider and it goes like this: “Taking risks for humanity makes someone the changer”! All I can add to that is don’t wait for becoming a changemaker but just do what you love instead, find your flow and you will be rewarded because as Seneca says: “Luck Is What Happens When Preparation Meets Opportunity”. 😉

Ecosummit promotes the best startups from seed investment until exit and if you want to be a part of it the application period for ECO15 London Award to promote Ecosummit London 2015 on 6-7 October at the Crystal have just started! They look for 6 new startups winning the ECO15 London Award as the ECO15 Berlin Award winners will not be nominated again.

So let’s sign up for a great event in London because Ecosummit brings you a lot of opportunities and is a high-class event and as their tagline says: Smart Green Energy Rocks! 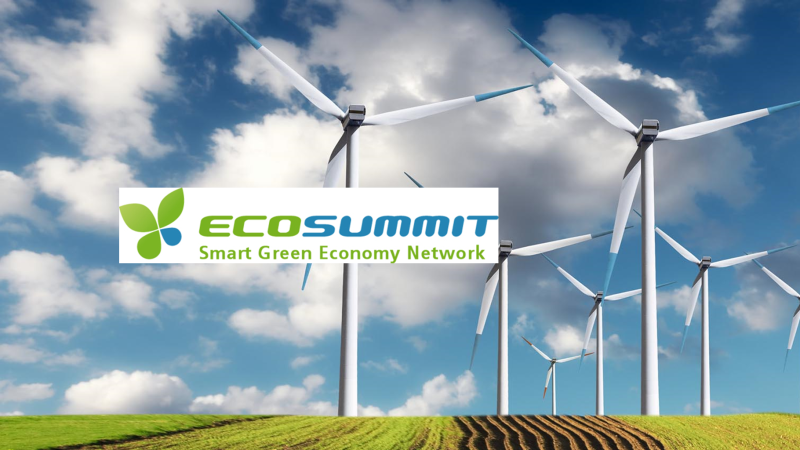 Get in touch, if you have any question

If you are a startup or just interested in innovations, don’t miss the next events to follow up....